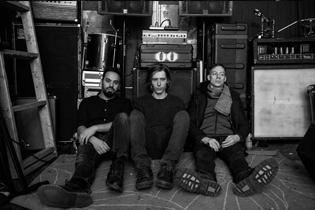 Born out the same Toronto DIY scene that spawned Metz/Soupcans/HSY/Greys, Odonis Odonis cut their teeth at the now defunct Buzz Garage, where they built a solid foundation as a crushing live band. Onstage, Tzenos (vocals, guitar) is flanked by Denholm Whale (bass) and Jarod Gibson (drums).

The live show is the point where their diverging influences and hypnotic visual aesthetic collide. 2011's Hollandaze showcased the band's ability to create something that was uniquely theirs out of a patchwork of influences as disparate as surf, industrial and old bmovie horror films. No one label fit, so "industrial surf-gaze" was coined. The group returned in 2013 with their Better EP, upping the intensity of their frantic post-punk by focusing in on their talent for tuneful abrasion.

Their follow up and 2014 Polaris nominated album, Hard Boiled Soft Boiled, finds Odonis Odonis pushing their sound into new territory, because much like the hypnotic spiral that came to be associated with the band's debut record Hollandaze, Odonis Odonis do not follow a linear path. This album was rewarded with a Polaris Prize short-list nomination and the video for "Order In The Court" received Top-Ten recognition at the Prism Prize. The album was included in favoute year-end lists on Pitchfork, Stereogum, Vice-Noisey, Spin and NME. The band toured internationally, performing a 4-month tour of the US, Canada, Europe and the UK to support the album.

In 2016 the band will release their fourth studio album – a 12 song digital and vinyl release produced by Colin Stewart and featuring performances from The New Pornographers' Kathryn Calder, Our Founders' Mike Olsen and the members of Brasstronaut. Titled Post Plague, the first single will hit radio and streaming services in February on Buzz Records in Canada and Felte Records in the US.