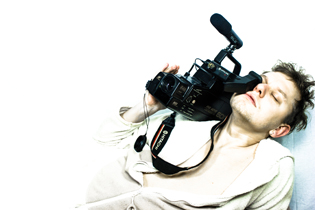 Floris has been making music for longer than we know of, and probably longer than he can remember himself. From composing a solo classical piano opus in six parts when he was a teenager, to minimalist electronic pieces and dark industrial foolishness, the man has done it all.

In general, Floris Bates' music is a mixture of emo vulnerability and sexual frustration. The contrast of his musical skills and punky skepticism makes it sound like Andrew Lloyd Webber on adderall while crying over his lost toyboy. His serenades to various supermodels and movie characters give you an insight of this guys twisted little world where subjects like medication abuse and dubious photoshoots are being discussed without any shame.

If anyobody had to embody the slacker type to perfection, it would be Floris Bates. In this sense, Floris is a true artist, not preoccupied in the least by the daily restrictions most of us put ourselves into. Just like good wine, you have to wait a long time for Floris to do something, but once he finally puts his mind to it, you can be sure the result will be sexy as hell.

With his two latest albums Baby I Made You a Mixtape and Celebrity Sextape, Floris has also built a strong live set. He will be showcasing it at a few festivals in early 2017 with his band The Rented Friends.