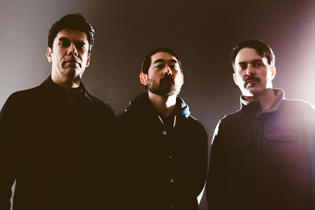 Connections and circumstance are sometimes hard to ignore. Everything Fades' story starts with two friends and a singular thought - to start a band based on the influences of their lives. Music, life, love, loss. Marcus Piña (Roky Erickson, Love Battery, Astronaut Suit) and Daniel Owens (New Roman Times, Register, Marcy) have inadvertently known each other for many years through mutual close friends, even though they had never met. Soon after meeting in 2009, they quickly bonded and began the preliminary discussion of playing music together.

Forward to late 2014 and that idea came to fruition. With the help of Kevin Flack (Distance Runner) holding down the drum duties, Everything Fades recorded their first foray into the haze of dark psych rock/shoegaze with Eric Wofford at Cacophony Studios in Austin, TX. From that output comes the wrapped in reverb, dissonance and trance double EP "Here's to a New Tomorrow/Moving Mountains", internationally released April 18th, 2016 by Dutch indie label Geertruida.

Blog write ups from all parts of the world and sharing bills with touring acts such as Cheatahs and The Life and Times are just a few of the successes Everything Fades has seen in it's short tenure. With the international release of their first recorded material, the future looks very bright for the band described as "Swervedriver meets The War On Drugs".