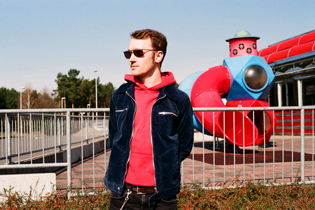 DJ Dingo Susi exists since sometime 2010.
Benjamin Wild, of course, had been making music for many years, stubbornly creeping up and down the neck of his guitar, and, separately, producing electronic messes of sound on his computer. One day, with the help of a friend, he successfully set up his gear to let the worlds collide and record guitar-based songs on the computer. Plus, he came up with a very cool name. So finally, this was what he was gonna do from now on, all the time.

He then went on to release his first official album (some private albums have, to this day, stayed in private circles), 'Dingo' (2015), on cassette through Fall Break Records from Atlanta, Georgia.
That was the point when the Dingo and the local Berlin music scene developed a growing interest in each other. DJ Dingo Susi, accompanied on bass by his good friend Mario Kissler and a cassette deck uncontrollably blasting out a white cloud of drums and synthies, started playing more concerts in Berlin and other cities.

On 'Farevalley', DJ Dingo Susi's 2017 album out on Geertruida, you can explore yet another corner of the Dingo universe - sometimes grand, sometimes small, sometimes sweet, sometimes feverish. It invites you to clear your most escapist vaults, while at the same time feeling familiar through the abstraction of hyper-real content.

If you are into reverb, melancholic pop, weird stories, several shades of noise, a certain lack of perfection all-around and more - DJ Dingo Susi might do it for you. He is, and will be, looking for those sonic moments where Everything and Nothing makes sense.