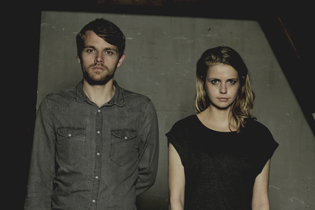 "This is one boy/girl duo who aren't dealing in cute and cuddly lo-fi. Fast, furious, and possessing more attitude in their smudged eyeliner than should be legal."

BlackboxRed sparks with energy. While Eva fights a fierce battle with her guitar, Stefan's propelling drums spiral them out of control, resulting in an awe-inspiring spectacle. Make no mistakes; this is one loud, seductive, and danceable Dutch duo.

Genuine rawness combined with bits of grunge, garage, blues and electro, topped with the out-bursting energy of a well-shaken soda can. Inspired by the likes of The Dead Weather, Crystal Castles and The Joy Formidable you get the idea of what these two are getting at.

In winter 2011 BlackboxRed released their first EP 'Battle the Sparrows', which in spring 2012 was also released in the UK. After extensive touring through the UK, Germany, the Netherlands and Denmark it's now time for them to make their mark with a first full-length.

The BlackboxRed debut album 'The Gunner and the Ghost' was released on October 11th 2013 on Geertruida.