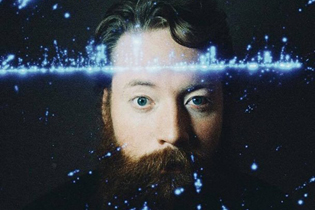 It was, as always, the love for new and ispiring music that led Geertruida to the cold and cool land of ice that is Iceland. And it was, as always, the great Iceland Airwaves festival that led us directly to the good stuff. Yes, we have love for music. That kind of love that can manifest itself at festivals, like Iceland Airwaves, but also from dancing on the beat of electro pop music at times when you least expect it, at places where you least expect it. Meeting the artist and music that is Berndsen definitely counts as such an experience.

To sum it up: there was a big guy, there was a big beard, and there was a knitted pink sweater that had a big red heart in just the right place. And there you have all the ingredients for a dancing party in Reykjavik. This guy was David Berndsen and he is the go-to-guy if you want to dance your socks of while freezing your ass of on electro pop music in Iceland. Together with his friend Hermigervill, a well known Icelandic musician and producer, he came together for his first album and created what we think is one of the best eighties reprise records of this day and age; Lover in the Dark.
But before you think this is 'just some other Viking guy going berserker on a synthesizer' (because we know you have seen that before on the internet probably somewhere..), it's much more than that. Oh yes.